I was born in London and grew up in the Thames Valley, London, and Kent. As a child I loved reading and would often escape to the orchards behind the house with a book. I particularly liked E. Nesbitt’s and Elizabeth Gouge’s books. My father worked in publishing and would bring home wonderful “dummy” books, beautifully bound with blank pages, that I would fill with pictures and stories. I have written about a dozen books for young readers and illustrated quite a few too, including the Araminta Spookie series.

I have two daughters, Laurie and Lois, who are grown now but still give me lots of ideas. I live in Somerset in the west of England in a very old house in the middle of a village. The west of England is a Magykal place, with marches, ancient ports and ruined castles. It is a great place to live and write Septimus Heap. 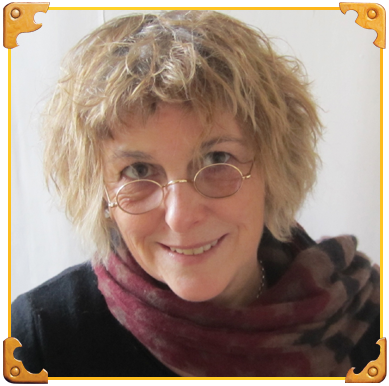 1. You have written many picture books and chapter books for children. What was it that inspired this, your first novel, Septimus Heap?

I have had the character of Septimus in my head for a long time—and the world he lived in too. I knew Septimus was someone who was in a strange and hostile world who did not have a clue about who he really was. But it was only when Marcia suddenly jumped into the picture that the story began to happen. She was so bossy and just insisted that I had to keep writing—and you don’t say no to Marcia.

2. When you began writing, did you know what would happen to Septimus, or did the story and the characters unfold as you wrote?

I knew what would happen to Septimus in the end, but I did not know exactly how he would get there, or who he would meet on the way. That’s the exciting thing about writing the world that he lives in—so many creatures and people just appear and make things happen.

3. Tell us little more about the world you have created—the Castle, the Port, the Forest, the Marshes…is any of it based on places you know and love?

The whole slightly off-the-wall feeling of the place comes from living in Cornwall, England!
The Castle is really a huge walled city—I love history and I’ve based it on ancient walled cities—the ones that were completely self-sufficient and almost little nation states in their own right. It is also a bit of wish fulfillment as I think it would be a great place to live.

The Port is a mixture of lots of different harbors around here, but much bigger. I love the buzz a place gets when boats are arriving from—well it could be anywhere. I see the Port as somewhere like that, full of beginning and adventures—and endings too.
The Forest comes from the old medieval Forests which were huge and were a law unto themselves. Scary to be in if you were a stranger, but free from the authority of the outside world if you belonged.

The Marshes are based on all the boggy bits at the end of the creek that I live on, and made much, much bigger. I took a canoe up there a couple years ago, along the smallest ditches it would travel through. I thought what fun it would be to do that as part of a journey. All the tides and the phases of the moon are real, and the times of high and low tide are those for Falmouth, Cornwall.

4. Is it true that you yourself have a boat called Muriel?

Yes, it is. She is just like Muriel in the book. She is a picarooner, a little open boat used for herring fishing in coastal waters (although my Muriel would not know a herring if one jumped up and bit her). She is green and has dark red sails. She also has an outboard motor which I don’t think Nicko would approve of.

5. At the core of Septimus Heap is the warmth and strength of the Heap family. What are some of their qualities that you most admire?

I like their chaotic acceptance of life, and the fact that they don’t do what they are told by authority if they think it is wrong. Stuff happens to them that makes their life difficult at times but they don’t moan about things, they just get on and sort it out as best they can. They are remarkably accepting of other people, I think because they are so strong as a unit.

They are also a family which becomes separated by circumstances—and I wanted to show that families can still be close to each other and care for each other even though they live apart. The family relationships develop as the books progress, and are central to the story.